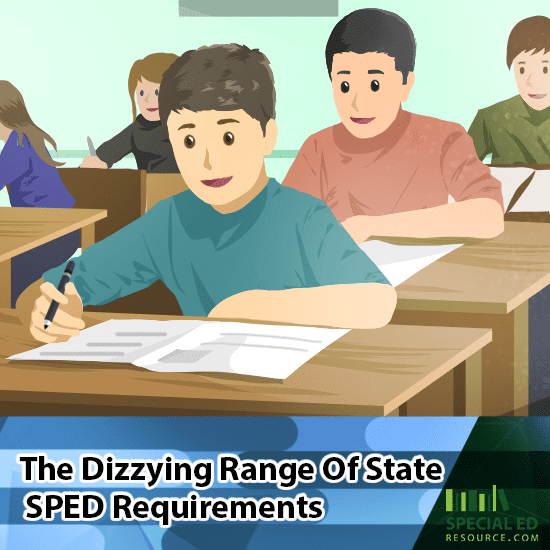 The behaviors, sassiness, refusal to listen, and asking the same question literally ten times to FINALLY get a response…

Then, you decide to move someplace new and far away…

You think, “it will be nice to have little Johnny in this new school! I’ve heard great things about the state and school district…”

Then, you get there and something strange happens.

Your son is not eligible for Special Education services…

But, he was enrolled in SPED in the state we just moved from… for years?

Yep, this scenario is all too real and happening… A LOT!

The number of students that receive special education assistance in the United States varies between 6% – 15% as a result of massive contradictions in how officials define their eligibility criteria and the struggle in recognizing students who are alleged of having a learning disability.

One reason is due to states experiencing difficulty when it comes to evaluating the rising number of students coming into the public-school system who do not speak English as their first language.

According to a report from the Government Accountability Office, the mixture of conflicting state policies and insufficient federal management continues to permit thousands of students with disabilities not to be recognized as requiring special education services, and as a result, do not receive such services.

Approximately 7 million students ages 3 – 21, or roughly about 13% of students who are enrolled in public schools, were recipients of special education services during the 2015 – 2016 school year.

According to the federal law, known as IDEA (Individuals with Disabilities Education Act), each state is expected to form a set of policies in order to make sure all students with disabilities are;

However, states conduct this process very differently, with some level of difficulty, causing a vast number of students to go unidentified.

Fears for a long time have been presented regarding the insufficient amount of clarity regarding how states recognize students with special needs. The lack of unity results in both misidentifying and under-identifying students with disabilities.

The Federal Department of Education is held responsible for making sure all states are sufficiently aiding students with disabilities. However, the Government Accountability Office’s (GOA) report showed that, as an alternative to studying the efficiency of states practices, GOA is simply reviewing if states are accomplishing those practices in a timely manner.

According to the report, there is still a lot of work left to do…

The Department of Education has to hold states accountable if they are not following and upholding the law!

Also, the DOE should offer assistance in order to efficiently recognize students and families who are in need while avoiding disorganized approaches. This “wild west” way of thinking leaves some without the aids they are requiring.

The Government Accountability Office’s report didn’t study the number of students recognized as having a disability according to race.

The report was presented as Democrats are intensifying their pressure on Education Secretary, Betsy DeVos to reinstate Obama-era leadership which looked to address racial inequalities in special education programs.

DeVos postponed the leadership before this went into effect. However, a federal judge in March 2019 ruled that DeVos delayed this leadership illegally and as a result, dismissed her decision.

According to data provided by the Office of Civil Rights, black students – and, especially black boys, are two to three times more apt to be registered into special education classes in comparison to their nonblack peers.

What are your thoughts on this national issue? Have you experienced any issues when moving to a different state?

There are many things regarding the school system that are broken… the fact that a child is eligible for services in one state, but may not meet the criteria in another, “takes the cake”! If you’re struggling with this serious example of red tape… it may be time to take your child’s education into your own hands! Take a look at Special Education Resources available that may help!