The Nightmare Known As ESY- From a Teachers Perspective 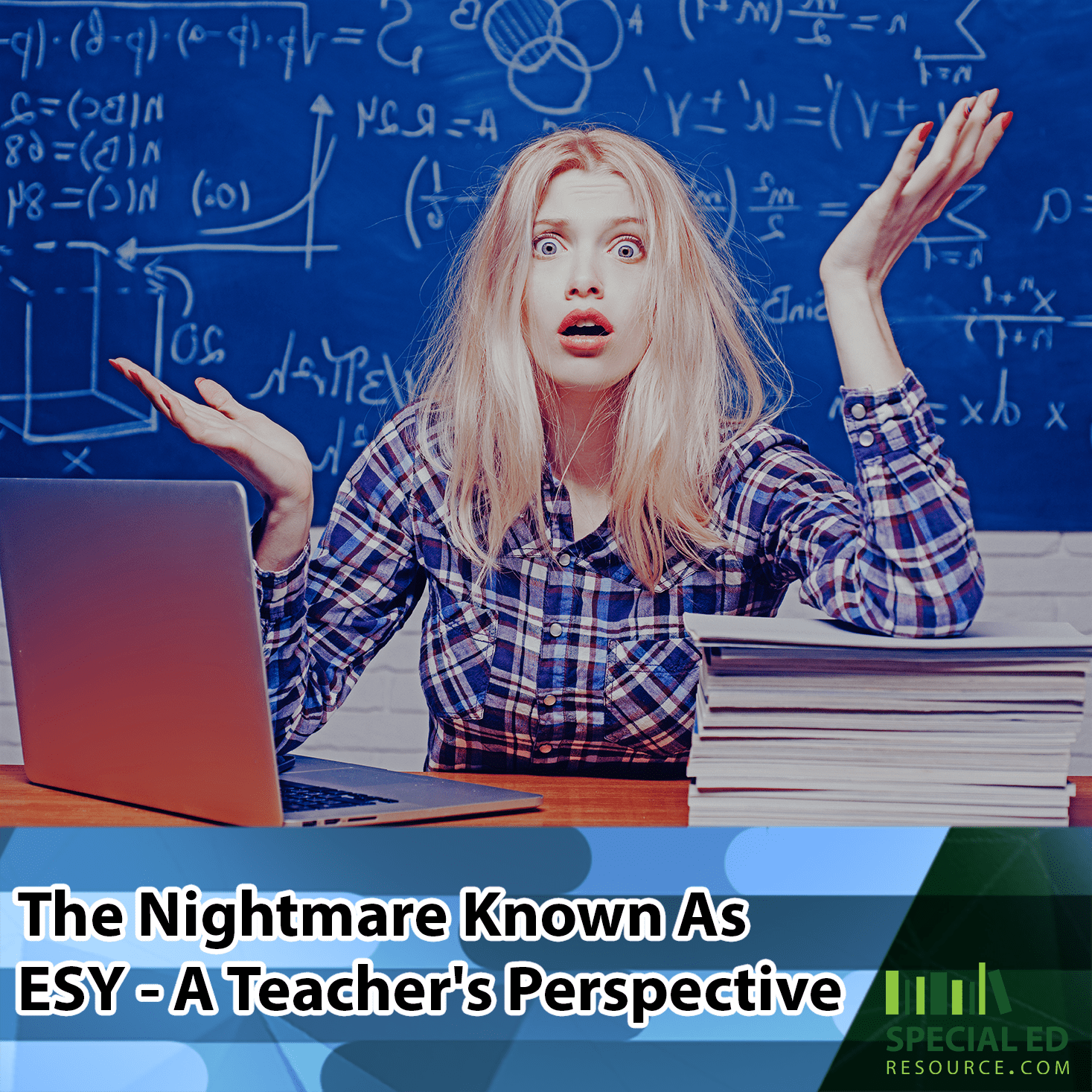 Ok, ok…the Extended School Year program itself isn’t the nightmare. It’s all the hurdles, politics, and red tape that we have to go through to get a special needs child in the program. So today I want to share with you ESY from a teacher’s perspective.

The Teacher’s Side of an ESY Qualification Process

Every spring, teachers across the U.S. work their tails off to ensure that the students in their class who need extra help, qualify for ESY (Extended School Year). Learn more about Extended School Year in Special Education in our Ultimate Guide.

The standards for ESY vary by state. Find your state’s laws on Wright’s Law blog.

For me, it seemed that no matter how hard I tried, the results were ALWAYS the same. Only a small percentage of the students who truly needed assistance were able to receive ESY services.

To better assist students in “qualifying” for ESY, throughout the year I tracked the progress (or rather regression). I called this brain atrophy of my students upon returning from extended breaks.

I’m a data-driven person. Therefore, I would spend hours collecting the essential information and keeping track of everything, even the goals that weren’t marked for ESY.

I wanted all of my students to qualify even though I knew from experience, that wouldn’t be the case.

One situation, in particular, was heartbreaking, and frustrating, and really put the erosion of the special education system into perspective.

I had a student in my self-contained classroom that dramatically regressed over ALL extended breaks. He had two goals on his IEP (Individualized Education Plan), which needed to be tracked for ESY.

Both of these were behavior goals since the school I worked at was a “behavior school.” Students were sent to my school because they were not successful in their school district.

Basically, the district didn’t have enough resources to support “certain kids with behaviors” in their own schools.

This student had been in my class the entire school year so I knew him well. I had tracked everything. And I was determined to get him qualified.

My data was completely accurate and precise. I almost became obsessed with how well I tracked everything, I was proud of myself.

After every break including long weekends, this student displayed dramatic regression. Sometimes his behavior and demeanor were almost unrecognizable upon his return!

To illustrate my point, let me begin by sharing a specific example of the type of regression this student struggled with. Before a particular break, this student was only acting out physically, about ten percent of the time on a typical day.

I know this seems like a lot (and it still was), but his behavior was constant when he arrived in my classroom! This drastic decrease in aggressive behavior was due in large part to our highly structured environment. He had a routine in place and knew the rules of the classroom.

When he returned from the winter break (like all other extended breaks) he was up to sixty percent! That’s over half of his day spent picking fights and showing aggressive behavior toward myself, and the rest of the class.

Along with violently hitting peers and staff members, he was no longer following the rules of the classroom. Before the break, he would follow the classroom rules about fifty percent of the time.

But, upon his return, only twenty percent of his day was spent minding the structure of the class… the rest of the time was pure chaos.

It took him just over a week to get back to where he was before the break.

When the school year was nearing an end, I began getting everything prepared for this student to receive ESY services. After all of the necessary documents were filled out perfectly, phone calls were made and meetings were held I was sure he was going to qualify.

I had everything I needed including:

I had put so much time into this, he was the one student who would definitely qualify… or so I thought.

After weeks (up until the last week of school) of waiting for the school district to “look over the paperwork,” they finally came to a decision.

He qualified for ONLY one week of ESY. WHAT?????

I was blown away, frustrated, speechless, in shock, and in tears all at the same time!

I called the district to see what had happened, what I missed, or perhaps what additional paperwork they needed in order to SEE just how much this student would benefit and NEEDED the additional assistance!

She was truly upset by their decision. She called the district and pleaded her son’s case… nothing changed.

This situation was like so many I encountered as a teacher… Most of my students either didn’t qualify or only attended ESY for a few weeks.

The ESY debacle, like so many other resource-deficient aspects of today’s school system, seems to boil down to a lack of money. These are services children have a RIGHT to receive!

Having people sit in a room and make decisions about children’s future, I kind of understand…

But, NOT listening to the student’s teacher, who spends every day all year with the child, I DO NOT understand. Not involving the parents at all… is borderline criminal.

Is this look at the ESY- from a teacher’s perspective just me?

What More Can We Do For These Children?

Bottom line, as an educator and a parent… NEVER stop pushing for your child. Be so loud that you wear people down to get your way! Finally… ask questions until you fully understand all aspects of your child’s education. They NEED you to advocate for them!

If you’re a parent who wants to stop your child’s regression, let’s have a chat about your child. Schedule a one-on-one conversation today at your convenience.

The tips we provide have been used by countless parents throughout the U.S. and help to create a solid baseline you can build on throughout any long break!

What are your thoughts on ESY from a teacher’s perspective or parent’s?

The Nightmare Known As ESY isn’t in the program itself, but in the red tape, politics and who knows what else involved in receiving these vital services. Lack of funding, lack of resources and massive overpopulation of schools have all contributed, however every child has a RIGHT to Free Appropriate Public Education (FAPE). So why does it seem nearly impossible for children to receive everything they need to be successful?